In response to recent COVID-19 concerns we are taking recommended precautions. Currently our lobby is closed, however, we are still seeing patients. We ask that you call us when you arrive so that we can get you and your pet checked in for their appointment. 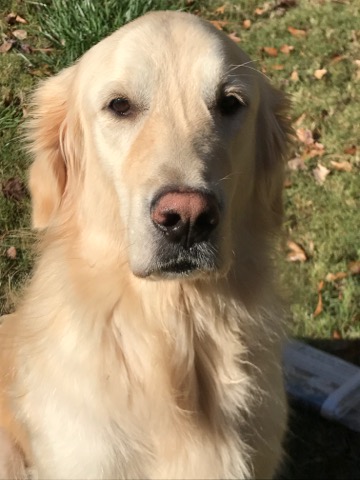 Rebel's story begins in 2003, although he is only four years old now. It was that year that my husband and I were visiting in Virginia, and a friend told us about a neighbor whose dog had just had a litter of 12 pure bred golden retrievers. We had a long been lovers of that breed since our youngest son had adopted one while a student at the University of Georgia. We could not resist the temptation to and see the big litter of goldens. It's not hard to understand what happen next. We immediately fell in love, and picked out one male and two females to bring back to Georgia with us. All three puppies were so good on the long drive home that we knew we had some very special dogs. When we got home the male went to our oldest grandson, who was 5 at the time, and he was named Buddy. One female went to a good friend, and we kept the other female. Our friend knew immediately that she intended to raise this puppy to have one litter, and thus began Rebel's line. He is the fourth generation from that beginning. Our friend bred her female, Ruffie, to a beautiful male, and had a litter of 12, one of which we brought home. With each succeeding litter, at least one female was bred to a male out of the line, so that our line could continue. Rebel's mother, Riva was bred to a gorgeous pure bred British Creme Golden, who was pure white, and from Australia. Therefore Rebel is mostly white like his sire, but with a golden tint, like his mother. We really wanted to continue this line because of their beauty, but mostly because of their amazing personalities and intelligence. With each litter, they all show the same wonderful characteristics.

Along the way we have had some sadness, all pet owners understand. I myself lost two pets to cancer, just 9 weeks apart. We did all that we could do, and research is being done to find why goldens are so prone to this terrible disease. We waited over a year until another female in this line was ready to bred, before we got Rebel. Our home was empty, but it was so worth the wait, and I guess that's why he's so extra special to us. 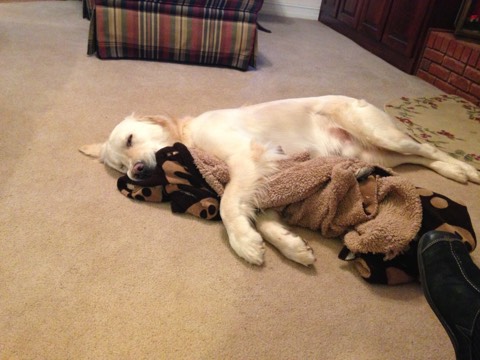 As for his name: Most of the dogs in these four litters thought the years have had names beginning with an R Yes, it gets confusing sometimes, but that's the way we did it. I am original from Oxford, Mississippi, and my parents attended Ole Miss, so he became Rebel after the Ole Miss Rebels. Rebel has been so special to us because he is the perfect companion. He gives unconditional love no matter what kind of mood we may be in. He follows me every step that I take during the day and he minds so good. I have said so many time that it is such an honor to be loved so deeply by such an innocent and wonderful dog... He brings us joy every day and keeps us moving, which is a good thing.

Monroe Veterinary Clinic has always taken fantastic care of our pets. When our previous two goldens were diagnosed with cancer they did all that they could do and then sent us to the vet school at UGA for specialized treatment. They felt for us and cried with us when we lost them. Now they take wonderful care of Rebel and he loves going over there to see all of his good friends. When we travel we never worry because we know that he is in good hands and he is happy. Rebel's favorite toy is a big red ball that he played with at Monroe Veterinary Clinic, so of course I had to buy him one for home. He walks around with a toy in his mouth at all time, but his favorite thing in the whole world is a blanket that I got for him when he came home to live with us. Now, 4 years later there's not much left but he still drags it around all the time and sleeps with it. Another one of his all-time favorite things is to go on long golf cart rides with his Daddy. They have a wonderful time together.

I'm sure you can tell by now that we love our beautiful boy and think he is the greatest and most loving dog possible. I read something the other day which applies here. Every day I will strive to be the person that my dog thinks that I am. There is nothing greater than the love of a dog. 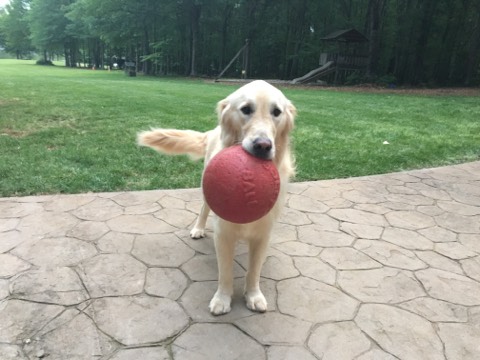