Henry Birdsong Holland, an Australian Labradoodle, came into our lives in January 2017. Due to pet dander allergies in the family, we decided on this breed because it is a non-shedding breed. After doing many months of research, we decided to go meet the breeder at SkyeDoodles in Marietta, Georgia. It was love at first sight!

We followed little Henry from his mother’s womb until the time we brought him home. Since Henry came from a litter of twelve, we assisted bottle feeding the pups after delivery.

As a baby, Henry was constantly at the Monroe Veterinary Clinic. From the $500 acorn visit, to consumed gloves, socks, you name it and Henry has tried to eat it.

Whether it’s a rainy day and Henry just wants to hang with the girls or if he has kept me up all accommodate us with Henry’s needs.

Henry loves to chase squirrels and chipmunks in the backyard and the cats in the neighborhood. He also thinks that his sister’s pink bathtub makes a great hangout spot and simply adores wearing her clothes!

Everyone knows Henry. Just ask the folks at Coffee Camper Company (Henry’s favorite stop) or anyone in downtown Monroe if they’ve met Henry, the Australian Labradoodle, and I’ll bet they say yes!

Our lives are forever changed because of Henry. No one could ask for a more loveable and loyal companion. We’ve had a few dogs in our lives, but not one as sweet as Henry!

Many thanks to Monroe Veterinary Clinic and their outstanding doctors and staff for their assistance with Henry over the last two years! 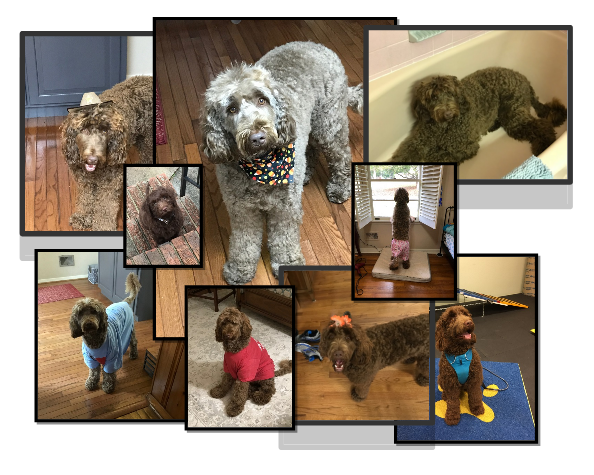